Enantioselective organocatalysis has become a central field for the asymmetric synthesis of chiral molecules. In the past ten years alone, this field has grown at an extraordinary pace from a small collection of chemically unique reactions to a thriving area of general concepts, atypical reactivities, and widely applicable reactions. Preliminary experimental findings and computational studies demonstrated the importance of four objectives in the design of a broadly useful iminium-activation catalyst: (i) The chiral amine should undergo efficient and reversible iminium ion formation. (ii) High levels of control of the iminium geometry and (iii) of the selective discrimination of the olefin P face should be achieved in order to control the enantioselectivity of the reaction. (iv) In addition, the ease of catalyst preparation and implementation would be crucial for the widespread adoption of this organocatalytic technology. The first catalyst to fulfill all four criteria was imidazolidinone. Imidazolidinone is effective for various classes of cycloaddition, and has been elegantly applied in a number of target syntheses. Their robustness, easy preparation from amino acids, and widespread use, make them one of the most powerful catalysts for general enantioselective transformations. 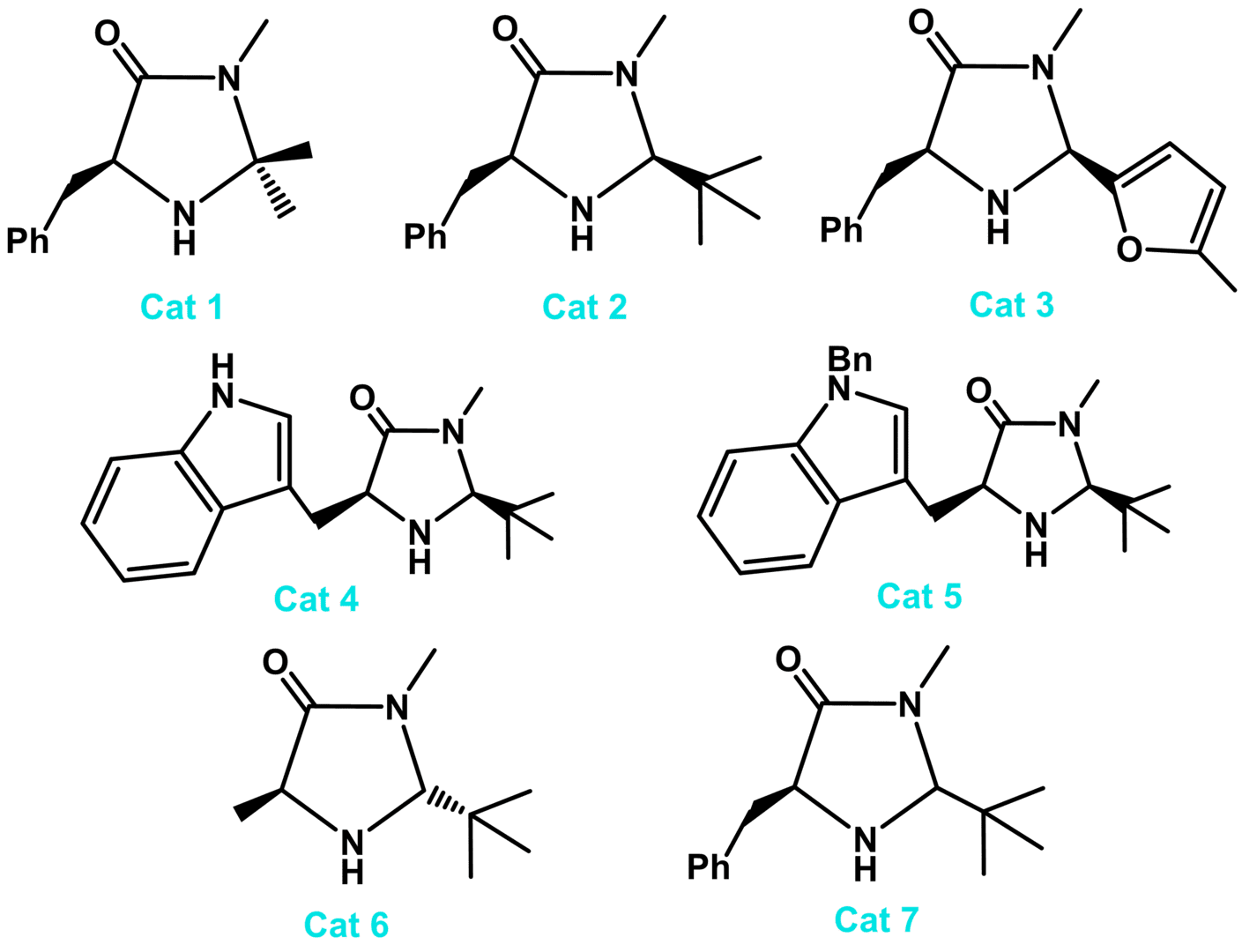 The imidazolidinone catalysts promote new reaction modes in organocatalysis, such as SOMO activation and enantioselective photocatalytic reactions. From this privileged structure seven principal imidazolidinone catalysts have been reported (Fig. 1) Catalyst 1 is used for cycloaddition and closed transition state conjugate addition reactions of α,β-unsaturated aldehydes along with several enamine catalysed processes. Catalyst 2 is the most broad ranging scaffold and is effective for cycloaddition, conjugate addition, enamine and SOMO catalysis. Catalyst 3 is efficient for reactions of α,β-unsaturated ketones that proceed via iminium ion intermediates, expanding the substrate scope of known transformations to encompass this important functionality. Tryptophan based catalysts (e.g., Cat 4 and 5) provide a similar reactivity profile to the phenylalanine derived catalysts and in certain cases have resulted in higher levels of enantioselectivity. More recently, the imidazolidinones 6 and 7 have been introduced for SOMO catalysed transformations.

Chiral imidazolidinone as an organocatalyst was developed by MacMillan and co-workers in 2000 and they evaluated this organocatalyst originally in the enantioselective Diels-Alder reaction. Later, this catalyst was used in a number of other asymmetric organic transformations. Imidazolidinone organocatalysts were also successful for 1,3-dipolar cycloaddition reactions between nitrones and α,β-unsaturated aldehydes, alkylation reactions of pyrroles by olefinic aldehydes, and α-chlorination of aldehydes. The catalyst was developed in the context of a general strategy for stereoselective organocatalytic reactions promoted by chiral amines alternatives to Lewis acid catalyzed ones. The reversible formation of iminium ions from α,β-unsaturated aldehydes and amines emulates the equilibrium dynamics and π-orbital electronics that are inherent to Lewis acid catalysis resulting in a LUMO-lowering activation. The iminium ion formation is enhanced by the presence of acid additives so the catalyst operates in its protonated form.