Chirality is the basic property of three-dimensional objects. Objects with three-dimensional structures have properties that are completely consistent with their mirrored plane shapes, but cannot be completely overlapped in three-dimensional space, just like the relationship between the left and right hands of humans. Compounds with chirality are called chiral compounds. In addition to containing chiral centers, compounds containing chiral axes, chiral planes, chiral helices and other factors also belong to chiral compounds. In general, a molecule is chirality if it has neither a plane of symmetry nor a center of symmetry. Typically, the two enantiomers of most chiral compounds have exactly the same boiling or melting point, and have nearly the same solubility in achiral solvents. Their chemical reactions are also the same under achiral conditions. However, under chiral conditions, the behavior of these enantiomers can be quite different. For example, its physical properties or chemical reactivity can be significantly changed under chiral conditions.

The determination of the absolute configuration of a chiral center is to determine the spatial orientation of the molecule and correlate that orientation with the positive or negative symbols (right- or left-handed helical) of the compound's rotation to polarized light under given conditions. A certain chirality is involved in most biological processes. In order to understand the function of chiral molecules in biological systems, it is very important to determine the absolute configuration of chiral molecules. Currently, there are four main methods for determining the absolute configuration of chiral molecules: (1) chemical correlation method, (2) nuclear magnetic resonance, (3) X-ray diffraction, (4) spectroscopy, such as optical rotation spectroscopy, circular dichroism chromatography, vibration circular dichroism, etc.

Among the methods for determining the absolute configuration of chiral compounds by NMR, the Mosher method is the most commonly used. That is, the 1H-NMR or 13C-NMR shift data of the product after the reaction of the sample molecule with the chiral reagent were determined by derivatization into diastereomers or similar diastereomers. The obtained chemical shift difference is compared with the model, and finally the absolute configuration of the chiral center is deduced. For example, the Mosher method is to combine the chiral secondary alcohol group (or secondary amine group) of the sample with (R) or (S)-α-methoxy-α-trifluoromethyl-α-phenylacetic acid (Mosher Acid, MTPA, Fig. 2) to form the corresponding ester or amide, and then the H NMR spectrum of the ester or amide was measured. According to the shielding effect of the aromatic ring of MTPA, the chemical shift difference of 1H-NMR or 13C-NMR signals before and after the esterification ( or amide ) of the analyte and MTPA was compared, and the absolute configuration of the secondary alcohol ( or secondary amine ) was deduced from the difference of the chemical shift in the spectrum and the model diagram.

The NMR method of chiral derivatives has the advantages of less sample consumption, simple synthesis of derivatives, rapid and accurate determination, and has been very mature in the absolute configuration determination of chiral alcohols, chiral amines and chiral carboxylic acids. Since the currently developed chiral recognition agents are mainly targeted at certain groups in the chiral center ( such as hydroxyl, amino, and carboxylic acids ), and require expensive chiral reagents for derivatization, their application range is limited.

The single crystal X-diffraction method is used for the determination of the final three-dimensional configuration with less sample consumption, rapid determination, and reliable and intuitive results. However, due to the high price of the testing instruments and strict requirements for single crystals, the application of X-ray diffraction is also limited.

Among the spectral analysis methods, the most well-known and widely used chiral molecular configuration determination methods are optical rotation spectroscopy (ORD) and circular dichroism (CD). This method has low requirements on sample purity, functional groups and crystallization, and has no loss in the measurement process, so it has been widely used. Vibrational circular dichroism (VCD) has grown tremendously in recent years and has gradually become an important tool for identifying the absolute configuration of chiral molecules.

The wavelength range of plane polarized light used in traditional circular dichroism is generally in the ultraviolet region (200-400 nm). The difference between the absorption coefficients (ε) of chiral compounds (solutions) in left-handed and right-handed circularly polarized light varies with the wavelength of incident polarized light, and the resulting spectrum is circular dichroism, also known as electron circle Dichromatography (ECD). This method mainly obtains the stereochemical information of the chromophore by measuring the Cotton effect sign of the optically active sample under circularly polarized light. Then compare the Cotton effect of the sample with the standard (a compound whose absolute configuration is known and similar to the sample drug structure), and the absolute configuration of the analyte can be deduced. Alternatively, the absolute configuration of the analyte can be obtained by comparing the experimental value with the theoretical calculation value by means of computational chemistry. 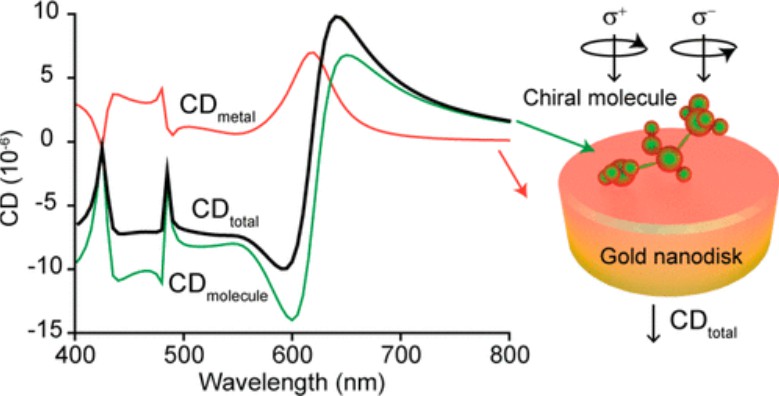 Conventional circular dichroism requires that chiral molecules must have UV absorption, which limits its wide application. In the 1970s, Stephens et al. successfully measured circular dichroism at frequencies in the infrared region, vibrating circular dichroism (VCD). VCD is the spectrum of the difference between the absorption coefficients (∆ε) of the left-handed circularly polarized light and the right-handed circularly polarized light in the infrared light. Due to the complexity of vibrational spectra, it is difficult for VCD to develop a suitable theory to explain the structure-spectra correspondence as traditional electronic circular dichroism (ECD) does, and the absolute configuration of chiral molecules is determined mainly by the comparison of theoretical and measured values.

The biggest advantage of VCD over ECD is that it does not require a chromophore (ultraviolet absorption) in the molecule. Almost all chiral molecules absorb in the infrared region and produce VCD spectra. In addition, the VCD test is measured in solution state, no single crystal is required, and achiral impurities in the sample do not affect the measurement results. With more and more attention and research, VCD will become a powerful tool to identify the absolute configuration of chiral molecules.

In addition to the above four classical configuration determination methods, infrared spectroscopy and ultraviolet spectroscopy are also used to assist in the determination of the configuration of compounds. BOC Sciences can provide customers with different scales of high standard scales chiral chemicals and chiral related services. If you are interested in our chiral analysis services, please click here for more information.