1. What is chemical chirality?

2. What is optical activity?

The ability of chiral compounds to deflect the plane of polarized light is called optical activity. A mixture of equal amounts of the dextrorotatory and levorotatory enantiomers does not exhibit optical activity and is called a racemic mixture or racemate.

The vast majority of chiral compounds contain one or more chiral carbon centers in a tetrahedral configuration. Most of the asymmetry is formed when sp2-hybridized carbon atoms are converted to sp3-hybridized atoms. For example, carbonyl groups, enamines, imines, and alkenes undergo chemical reactions that may introduce chiral carbon atoms into the molecule.

4. What are enantiomers and diastereomers?

Enantiomers are a pair of molecules that exist in two forms that are mirror images of each other but cannot be superimposed on each other. Diastereomers are defined as non-mirror-image compounds that have the same molecular formula and order of bonding elements but are not superimposable. 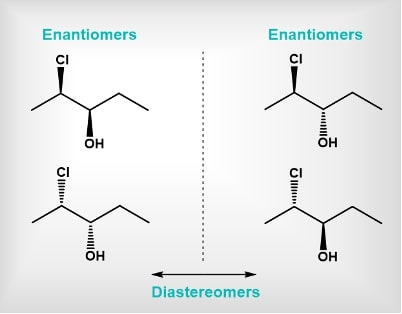 5. What are the chiral catalysis strategies?

Chiral catalysis can be represented in a general picture as a process that takes place in a so-called chiral pocket formed by the catalytic centre (in many cases a metal) and the bulky groups in the near environment that restrict the mobility of molecules around the coordinated substrate, provoking the enantioselection. Chiral catalysis can be divided into chiral metal catalysis, organic small molecule catalysis and biocatalysis.

6. What is chiral auxiliary?

A chiral auxiliary is a compound or unit temporarily added to an organic synthesis reaction in order to control the stereochemical outcome of the synthesis. Chiral auxiliaries can bias the stereoselectivity of one or more subsequent reactions.

7. What are chiral ligands?

In asymmetric catalytic reactions, chiral ligands can coordinate with metal ions to form chiral catalysts. Chiral ligands are usually complicated molecules with ample possibilities of variability, not only in the bulky groups forming the chiral pocket, but also in positions relatively far from the catalytic centre.

8. What is chiral resolution reagent?

A chiral resolution reagent is a chiral auxiliary used to convert mixtures of enantiomers into diastereomers in order to analyze the amount of each enantiomer present in the mixture.

9. What are the resolution methods of chiral drugs and their intermediates?

Currently, the resolution methods of chiral drugs and intermediates mainly include crystallization resolution, chemical resolution, kinetic resolution and others.

10. What are the chiral synthesis techniques?